HomeBlogour blogIn a World of Financial Noise, Be Wary of Predictions 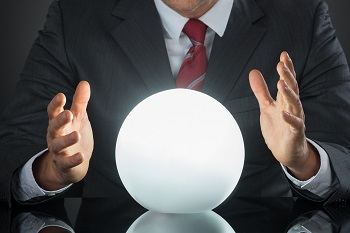 Investors are constantly bombarded by what can only be described as noise about investment markets. Today, more than ever there's a continuous crush of headlines and Twitter feeds, as well as television and radio programs, that collectively provide ceaseless hype, misinformation and biased views.

The market gyrates constantly on headlines and sound bites, but you should pay them little heed. Trading on day-to-day news can be dangerous to your financial health, especially if your long-term goal is wealth accumulation. Failing to filter out this media noise can make you a slave to it.
Instead, determine in advance what you're going to listen to-and from whom. Those you definitely should ignore include self-appointed financial gurus who commonly appear on television and radio programs and in articles. You've doubtless heard the saying, "Beware of strangers bearing gifts." Well, you should also beware of gurus with crystal balls bearing predictions.

The stock-in-trade of these ubiquitous gurus ­predicting market movements is kind of like predicting the winner of a football game after accounting for the point spread (only there are more variables). After the outcome, no one focuses on the countless predictions gone awry, so these so­-called experts aren't held accountable. They're able to stay in business only because people are seduced into following them as they promote their own self­-serving agendas. And often, these agendas involve a product or service.

Unfortunately, many investors act on the predictions of these fortune tellers to the detriment of their portfolios. More often than not, their forecasts prove to be outright wrong.

This is pretty remarkable when you consider that the overwhelming majority of economic and market forecasts predict that major indexes will go up or down, so you'd think they would be right 50 percent of the time. But by at least one measurement, on average they are right only 48 percent of the time. That's right: You could toss a coin and, on average, you'd be right more often than the forecasters.

The 48 percent figure is the finding of CXO Advisory Group, which has been tracking market forecasts since 1998. The accuracy of these forecasts has been lower than 50 percent many years since 2000. The statistically inclined might ask how the average of up or down market predictions could not work out to 50 percent. Here are two possible explanations: 1. Some prognosticators tend to follow each other, leading to more incorrect forecasts than correct ones; and 2. Some tend to make extreme forecasts to get attention, decreasing their accuracy records.

Another common form of market noise comes from various investment newsletters. There have always been plenty of them, but because of the ease and low cost of web publishing, there's not a plague of them. You have probably received solicitations from these much-hyped newsletters or have heard or read advertisements for them.

These publications offer tips that, they claim, can make you rich if you act on them. Sound too good to be true? Well, like most things that sound that way, be wary of such seductions.

Publishers of these newsletters have to make the benefits sound alluring because subscriptions to them often cost several hundred dollars a year. If the content of these publications were as valuable as their editors claim, you might ask, why do they sell newsletters that benefit other investors? Why don't they keep such wealth-creating strategies and "secrets" to themselves and make a vast fortune?

Another problem with these newsletters is that they convey information that's already public. Because other investors also know this information, readers gain no competitive advantage, as the information is already reflected in current investment prices. And like gurus'predictions, these newsletters tend to be focused on attempting to beat the market--a futile undertaking.

So don't turn your investing judgement or discretion over to silver tongued gurus or newsletter publishers, leaping in the directions they point. Instead, construct a well-diversified global portfolio aligned with your personal goals and risk tolerance, and maintain that portfolio wisely, rebalancing it when necessary to restore the original proportions of different types of assets.

And remember: have the discipline to resist the siren call of those touting the investment flavor of the month, stick with your plan.